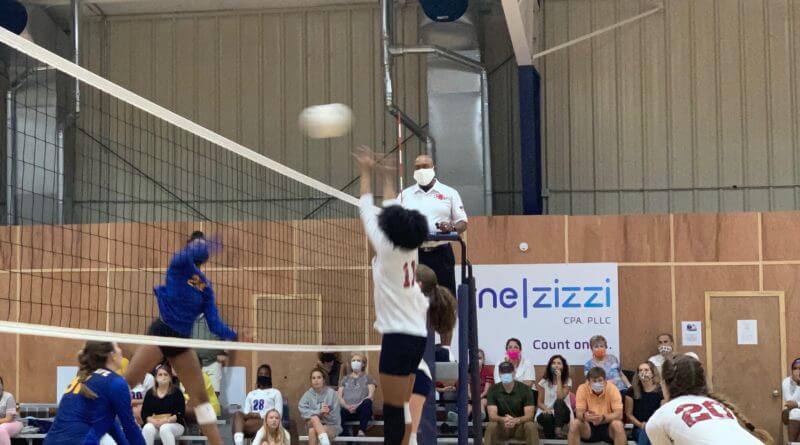 On paper, this matchup is a complete mismatch. Tupelo is the largest school public or private in Mississippi while Regents is one of the smallest MAIS schools. That wasn’t nearly the case on the court.

“This was awesome,” Bishop said about the match. “We were able to work on some different things and give some people some looks. You saw with the JV match, you’re not going to win a free ball. If you’re going to free ball it to them, they’re going to hit it back to you. I talked to varsity about that to just running our game and working on some things. We have a big week next week with (defending 5A champion) Center Hill and (Tupelo division rival) Desoto Central and our home tournament Volleyfest. It was a great match.”

Tupelo (4-1 overall) learned quickly in the first set that despite the obvious classification size difference Regents (5-13) was able to keep up and hold their own as the Lady Wave was only up 14-11 midway through the set, but an 11-0 service run by Tupelo after that point allowed the Lady Wave to capture the first set.

If Tupelo didn’t learn it then, they sure learned that in the second set as Regents jumped out to as many as a four-point lead at 9-5, but behind the strong arm of Tupelo’s Alissa Hawes who had 10 kills in the second set alone, the Lady Wave were able to power past Regents 25-16, including a 10-1 run to end the set, and take a 2-0 set lead in the match.

“She’s one of our go-to’s, just solid,” Bishop said about Hawes. “This is her first year to play all the way around. She’s worked really hard to keep that spot in the rotation while in the back row and she’s really done well for us. We’re trying to utilize her all the way around.”

“It wasn’t our best game,” Regents head coach Kacie Hengler said. “We had our moments. I think the second set we played much better, especially that first half. We had some bad rotations in there. They’re young, so they’re going to have some of those mental breakdowns here and there, but overall I’m really happy with how they played. Especially JV, that’s our future right there.”

In the third set, those mental breakdowns started to show as Tupelo raced out to a 19-6 lead and cruised the rest of the way to win the set 25-11 and take a three-set victory.

The next scheduled Regents match is not until next Thursday when they travel to Hernando. JV plays at 5 p.m. while Varsity plays at 6 p.m.