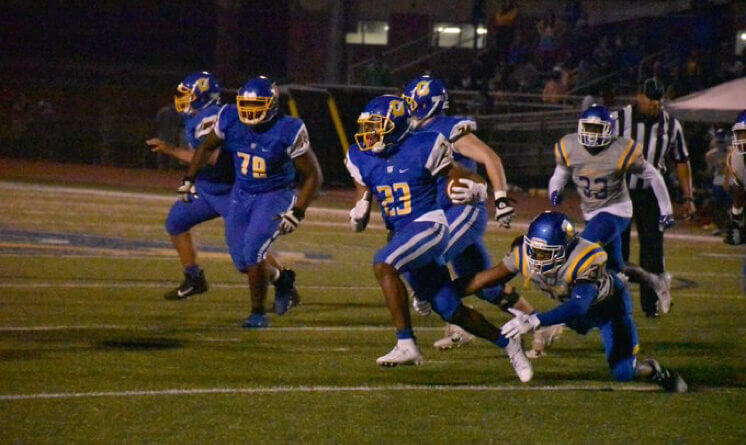 If someone told Tupelo that Oxford would run four offensive plays for one total yard of offense in the third quarter with the Golden Wave leading 6-0 at halftime, you would feel like you have a really good shot at stopping the Charger’s 21-game win streak.

Oxford’s offense did next to nothing for most of the night – they had just 75 yards of total offense, but the Chargers blocked two punts and added a pick-six in the third quarter and take the most unlikely of routes to another comeback victory, this time over Tupelo 25-14 to win the Division 1-6A Title and have home-field advantage for the first two rounds of the Class 6A playoffs.

“(Former Oxford) coach (Johnny) Hill used to say if you win two out of the three phases, you should win the game and I think that was the case tonight,” Oxford coach Chris Cutcliffe said. “We put a big emphasis on special teams all the time. Our guys take a lot of pride trying to block punts. We work it a lot and I was really proud of us getting it done twice tonight.”

In the first half, Tupelo (6-4 overall, 5-2 in Division 1-6A) executed their game plan for the most part which was churning the clock and coming away with points. The Golden Wave were able to get two field goals from Tanner Goggins from 30 and 25 yards out respectively to give Tupelo its 6-0 lead all while keeping the ball for 17 minutes in the first half, but ultimately Oxford (9-0, 7-0) kept Tupelo out of the end zone from even bigger damage on the scoreboard. Tupelo by far and away won the time of possession battle holding the ball for more than 32 minutes while Oxford had the ball for less than 16 minutes.

“A huge credit goes to Jason Wilfawn, our strength and conditioning coordinator to have our guys ready to go,” Cutcliffe said regarding why Oxford’s defense didn’t seem to tire out during the second half. “He does an amazing job. Our guys are really well conditioned and play a four quarter ball game. Defensively we gave up a few drives in the first half and thankfully we were able to hold them to field goals, but our guys came out and played really great in the second half.

Oxford’s defense opened up the third quarter with a three-and-out for Tupelo. The Chargers blocked the punt attempt and recovered at the Tupelo 1. Michael Harvey was able to punch it in with a quarterback sneak on the next play. The two-point conversion was good and Oxford led 8-6 with 10:40 left in the third quarter.

After the teams exchanged successful punts, Oxford was able to block Tupelo’s punt again and this time Cashe Shows recovered the ball in the end zone to give Oxford a 15-6 lead with 3:48 left in the quarter.

On the ensuing Tupelo possession, quarterback Jake Weir threw a pick-six to Jamal Giles who returned it 54 yards for another score and gave Oxford a 22-6 lead with 1:26 left in the quarter.

The Chargers midway through the fourth quarter finally put a mildly successful drive together milking more than four minutes off the clock and ending with a Jack Tannehill 35-yard field goal to give Oxford a three-possession lead at 25-6. Tupelo finally found the end zone with 53 seconds left on a Weir 11-yard touchdown pass, but it was too little too late.

“We obviously have a lot of work to do on (the offensive) side of the ball,” Cutcliffe said. “We got to execute at a much higher level than we did tonight. Give a lot of credit to Tupelo defensively, they did a great job. We’ve got to get back on the practice field and get some of these things worked out.”

Oxford will host arguably the toughest four-seed in the first round in the Class 6A playoffs next week in Madison Central, and a coaching staff Cutcliffe knows very well with several coaches having spent time at Lafayette several years ago.

“Now everyone is 0-0 and it is time to play your best football,” Cutcliffe said. “You gotta play your best football of the year in the playoffs when it matters the most. We got a big challenge ahead of us. They’re going to be very well coached and they’re talented. I know their coaching staff well, a bunch of great guys and really good coaches, so it’s going to be a good challenge.”