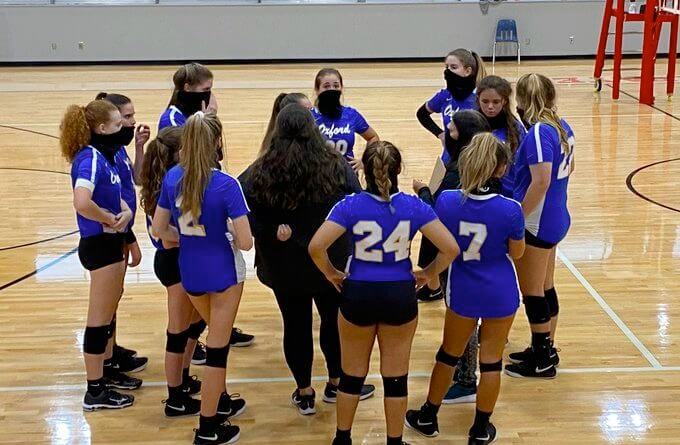 Even though this was the closest to a normal home Volleyball game in terms of the amount of people in attendance inside the OHS Gym and a handful of OHS students back in the student section, Oxford coach Ashley Martin saw what needed to be improved if the Lady Chargers will stand a chance come playoff time.

Oxford was swept by the Desoto Central Lady Jaguars 3-0 (25-12, 25-16, 25-19) Tuesday night in the OHS Gym in no small part due to the Lady Chargers being unable to handle some of the serves in the early sets.

“We had a lot of trouble with serve-receive first set,” Martin said. “(Between sets,) we kinda re-evaluated that and just kinda looked at each other and decided to make it a goal to be better at that in the second and third set. By the third set, we were better, but just not enough to push over that hump.”

The trouble in the first set for Oxford (2-2 overall) was on the receiving end of serves as Desoto Central (7-2) went on a 15-3 run to open the first set up from a 6-6 tie to a 21-9 Lady Jaguar lead with services from Amonie Silas and libero Megan Harris and easily took the first set.

In the second set, Oxford competed better receiving the serves and picking up points by rally, but was unable to keep service longer than a point after going up 5-2 early, as the Lady Chargers were able to only get one point on its service for the remainder of the set.

“We picked up their hits a little bit better (during) the second set and especially the third set,” Martin said. “We were more ready for their hits and ready from what we were going to see from them compared to the first set.”

In the third set, Desoto Central jumped to a 6-1 lead only for Oxford to counter with a 6-1 run of their own to tie the set at 7-7. The Lady Jaguars then went on a 8-1 run to take a 15-8 lead in the third set. The lead was trimmed to three a few times later in the set, but Desoto Central was able to finish the third set off 25-19 and take the match.

Oxford will be on the road Thursday to take on Lewisburg. JV starts at 5 p.m. while Varsity starts at 6 p.m.