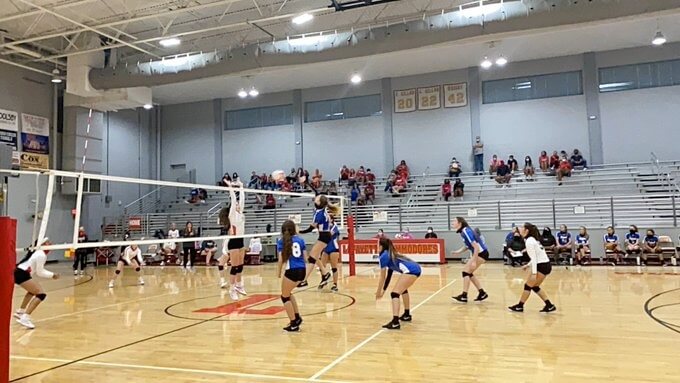 The first edition of Volleyball’s Crosstown Classic was not a normal sweep. The Oxford Lady Chargers had to earn it.

Oxford defeated the Lafayette Lady Commodores 3-0 (25-16, 25-22, 25-20), but the match could’ve easily found a fourth or even a fifth set if not for some heads up plays from Oxford setter Catherine Bianco during the second set.

Tied at 17-17 and after the ball was kept alive with a hard dig by Oxford’s Bree Lyons, Bianco dumped the ball into Lafayette’s unoccupied corner catching the Lady ‘Dores flat-footed. Later in the set with Lafayette (2-1 overall) up 21-20 and after another hard dig was made this time by Mary Laurel Bumgardner, Bianco with her head on a swivel quickly set the ball for Lyons who put it away with a kill. In both instances, the ball came quickly at Bianco a split-second after both digs which both came after hard spikes from Lafayette’s hitters, leaving the Lady Dores very little time to react defensively. Lafayette had built some momentum in the second set after having recovered earlier in the second set from a 10-5 deficit to take that 21-20 lead, but Oxford (2-1) instead ended up taking the set 25-22 with those momentum shifting plays.

After having the first set get away from the Lady ‘Dores, head coach Kelsie Poole knows her team let both the second and third sets slip away at the end. Similar to how the second set went, Lafayette fell behind in the third set 12-7 before rallying to tie the third set at 17-17 after Oxford was charged with a penalty point when they were caught serving out of order, but the Lady Chargers were able to recapture momentum and take the third set and the match in the end.

“We came out slow the first set and you can’t do that,” Poole said. “Second and third sets we actually had that in our fingertips. We’re going to make some adjustments next time and hopefully do a better job.”

One of those adjustments will probably be to better contain Oxford outside-hitter Ainsley Tacke. Tacke ended the night with a game-high 15 kills and added three service aces. Tacke scored the first two points of the match with two kills and Martin said she told her she felt she was going to have a great match.

“That was her goal,” Martin said of Tacke’s kill total. “I can’t remember what she told me she wanted to get, but it was pretty high up there. I knew she was going to come out hot tonight. She already told me ‘coach, I feel it tonight’.”

Along with Tacke’s 15 kills, Oxford was led by Bianco and Lyons with four kills and a team-high eight digs each for the Lady Chargers. Torrey Tkach also had four kills and added a team-high five blocks. Lafayette was led by the five kill, four block performance of Kailey Gooch who also added a pair of service aces. Harmony Jackson also had a team-high five kills and two blocks for the Lady ‘Dores. Brennice Kennedy and Maggie Tower each had four kills as well for Lafayette in their balanced attack. The Lady ‘Dores also had Deundria Shaw with a game-high six blocks while Chloe Carr was the only player with double-digit digs with 12.

Governor Tate Reeves at 2:30 p.m. Monday afternoon released a new Executive Order regarding attendance at high school sporting events. Up to 25 percent capacity is now allowed at all K-12 venues including high school sporting venues. This replaces the two-per-participant rule that was previously in effect. The mask mandate remains in effect. Lafayette Athletic Director Greg Lewis said about 200 people will now be able to attend Volleyball events in the gym, 25 percent of its 800 person seating capacity.

Oxford Activities Director Mike Martin said that 350 tickets will be available for Oxford’s Volleyball match against Desoto Central Tuesday night on a first-come, first-serve basis and for all foreseeable future Volleyball matches. The 350 number is 25 percent of Oxford’s 1,400 person seating capacity inside their gym. The new Executive Order is currently set to expire at 8 a.m. September 14.

The new Executive Order however was released too late for Lafayette to adjust to the changes prior to the Volleyball match Monday night and stuck with the two-per-participant order just for that match.

Lafayette will be on the road for the first time this season with their next match at Hickory Flat Tuesday night, a team they defeated 3-1 last Tuesday, JV starts at 5 p.m. while Varsity starts at 6 p.m. Oxford’s home match against Desoto Central Tuesday also have start times for 5 p.m. for the JV match and 6 p.m. for Varsity.