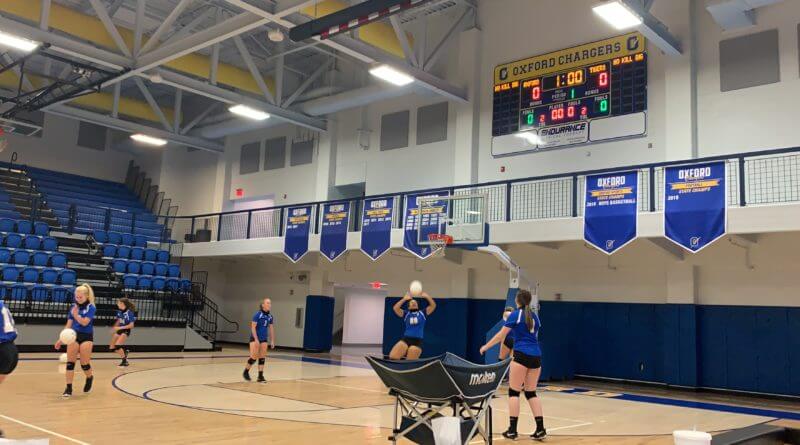 There were a lot of ‘new’ entering Oxford’s first home division contest since January 17, way back in the middle of basketball season.

Ashley Martin was making her debut at home as the head coach. Counting junior varsity player participants, about 100 people were inside the OHS Gym that can hold around 1,500 people. The OHS Student Section was empty thanks to the two-per-participant Executive Order that is in place by Governor Tate Reeves that restricted attendance to mainly family members. None of that mattered once the first serve was taken and the Oxford Lady Chargers came away with a Division 2-6A victory over the Hernando Lady Tigers 3-1 (25-19, 23-25, 25-15, 25-22), two days after losing in a sweep to Center Hill.

“It was a good comeback for us,” Martin said about the win after the loss on Tuesday. “(Wednesday)’s practice was probably the best practice we’ve had all summer. We worked on a lot of serve and receive. A lot of serving. That’s one of the biggest things we messed up on.  We passed the worst against Center Hill. We take stats everyday and that was definitely the worst we’ve passed all summer.”

It was a match that was determined a lot by long service runs where Oxford (1-1 overall, 1-0 in Division 2-6A play) took advantage of two such runs in the first set, opening up to a 5-0 lead before Hernando (0-1, 0-1) chipped away to tie the match at 13-13. After trading points, Oxford scored six straight to take a 20-14 advantage and maintaining it for the remainder of the set.

Hernando jumped on Oxford in the second set scoring nine in a row at one point to take an early 10-3 lead, a lead the Lady Tigers would maintain throughout the set and eventually needed to fend off a late run by the Lady Chargers, but ultimately took the second set to tie the match at 1-1.

In the third set, Oxford started off with a few good runs to take an 11-6 lead. After trading points in the middle of the set, Oxford used a 7-point service run to go from a 17-13 lead to 24-13 to easily take the lead back in the match taking the third set.

The fourth set was the most competitive, as neither team could take a lead bigger than two points until the end where Oxford made more plays down the stretch to take the fourth set and the match.

Oxford was led by the 17 kills from Ainsley Tacke. Bree Lyons had the lone double-double in the match with 11 kills and 11 digs. Torrey Tkach also had 10 kills and eight digs. Five players for Hernando had double-digit digs.

Oxford’s next game will be across town on Monday as they travel to the Lafayette Lady Commodores. The Junior Varsity match begins at 5 p.m. with the Varsity match to follow at 6 p.m.