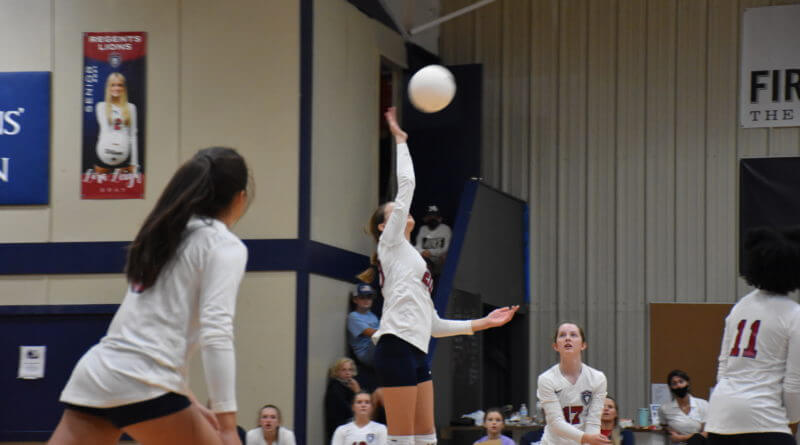 This match was simply not one for statistics when it came to kills, digs, or blocks, because one stat belonging to one player dominated the match.

Lauren Niemeyer had a whopping 27 service aces, accounting for more than one-quarter of all the points scored, as the Regents Lady Lions made easy work of the Pillow Academy Lady Mustangs 3-0 (25-4, 25-10, 25-10) Tuesday night at the Regents Gym one night after taking a four-set loss at home to the Starkville Lady Jackets on Monday.

Pillow Academy simply had no answer for Niemeyer’s serves that often found the gym floor before a player for the Lady Mustangs could touch the ball. Even if they were able to make contact, it often wasn’t a controlled hit.

“Like I told her during the timeout (in the first set) we need this kind of confidence out of you all the time,” Regents head coach Kacie Hengler said about Niemeyer. “The last couple of games she hasn’t been herself back there. She is one of my best servers, she has been (confident) until the last couple games, but today she was back, so I was really glad for that to get her confidence back and say ‘I can do this.’”

After taking the first set largely behind the service aces from Niemeyer, Hengler elected to keep the same starting rotation for the second and third sets in large part because she already changed the rotation due to an injury concern on the team and didn’t want to change her rotation to confuse her team about where they should be on the court.

“We had a lot of rotation changes tonight,” Hengler said. “I pulled my setter (Maggie Niemeyer) because her back has been a little sore, so I gave them a new lineup before the game. That was our biggest adjustment. Once they knew where they were on the court today, they were consistent and did a good job.”

Regents (3-7 overall) did not allow Pillow Academy to make a run of more than three points throughout the match en route to win the second and third sets and walk away victorious.

In a game largely dictated by the 45 service aces between the two squads and many points won by hitting or serving errors, Lori Leigh Bray led the Lady Lions with a game-high four kills. No player for Pillow Academy had more than one kill. Ella Wallace for the Lady Mustangs led all defensive players with three digs.

Regents next game will be at Desoto Christian Academy on Thursday. JV begins at 5 p.m. while Varsity begins at 6 p.m. Their next home match will be on Monday against the Water Valley Lady Blue Devils.