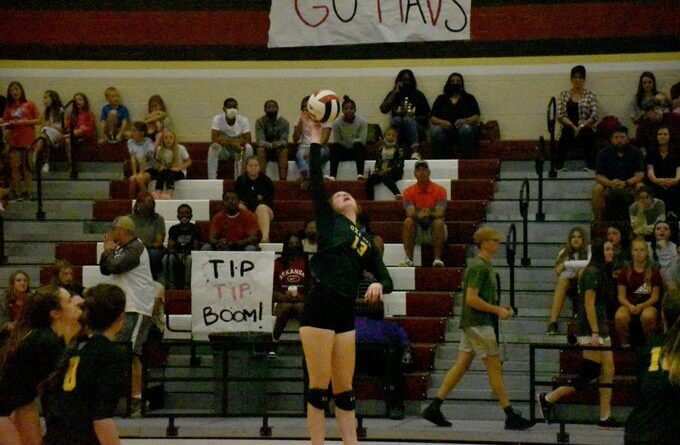 MADISON – The Oxford Lady Charger’s defense hasn’t really seen a ton of action with their offense being so productive, but Thursday night in a hostile gym environment, Madison Jones had her best match of the season.

Jones posted a season-high 19 digs, well above her sub-three digs per set season average in Oxford’s 3-0 (25-18, 26-24, 25-16) victory over the Germantown Lady Mavericks in the second round of the MHSAA Class 6A Playoffs held inside the Germantown High Gym.

The 19 digs surpassed her 15 dig performance in a two-set tournament victory over Arlington, Tenn. earlier this season. It is just her seventh double-digit total of the season, but six of those seven has come in the last nine matches.

“I’m so proud of Madison on how she played defensively, and she’s the leader of the back row,” Oxford coach Ashley Martin said of her libero. “We’ve been working really hard on mindset and covering, and she’s done a really good job of that. Just happy we’re moving on and playing at home.”

Oxford (28-2 overall) advances to the North Half match and will host Madison Central on Tuesday after their four set victory over the defending 6A champions Desoto Central.

The Lady Chargers raced out to a 22-9 lead in the first set before Germantown (24-10) scored six straight points to chop the lead down to 22-15, but Oxford withstood the rally and finished out the first set 25-18.

The second set was a see-saw battle with neither team managing to gather more than a two point lead for the majority of the set. With the set tied at 24-24, Germantown made two costly errors to hand the set to Oxford and put the Lady Mavs in a 2-0 hole.

“Our kids have done a good job of fighting adversity, and the second set we had a lot of that,” Martin said. “The second set was anybody’s to take, and the girls fought through and played really hard to finish the set.”

Oxford quickly took a 6-0 lead in the third set and maintained it throughout the set to complete the sweep and eliminate Germantown from the playoffs.

Ainsley Tacke led all attackers with 14 kills, and added three digs plus a block. Bree Lyons had another all around game with eight kills and seven digs along with a block of her own. Torrey Tkach was second in the match in kills with nine and added a team-high three blocks defensively. Five players for Oxford recorded at least five kills in the match. Germantown was led defensively with 14 digs from Kaylee Lowther and 11 digs from Allie Varner. Miriam Hoerman had a match-high six blocks for Germantown. Offensively the Lady Mavs were led by the seven kills from Jade Fleming.