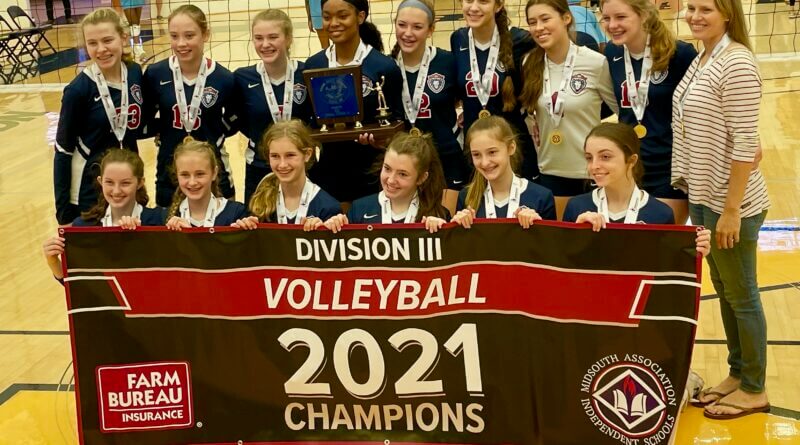 CLINTON – Throughout much of the regular season, second year coach Kacie Hengler scheduled tough opponents like Lafayette, Tupelo, Center Hill, Jackson Academy, and Hartfield Academy to prepare for the MAIS Tournament at the end of the season.

It turns out she over prepared her team as near the end of the season the higher powers of the MAIS split the overall tournament that has been done in the past and split it into three classifications. It was not revealed until just more than a week ago that Volleyball was going to split between three divisions.

Regents defeated Hillcrest Christian on Wednesday 3-0 (25-9, 25-18, 25-17) that sent them to the Division III Championship match at A. E. Wood Coliseum at Mississippi College. Thursday morning they defeated the West Memphis Christian Black Knights 3-0 (25-15, 25-10, 25-9) to win their first state title in school history.

“We’re definitely ready for this,” Hengler said about her team’s preparation heading into the tournament. “We’ve played against much tougher teams all season. We were more than prepared. We were really preparing to play against the Hartfield’s, JA (Jackson Academy), we didn’t know we were going to be broken into divisions until two weeks ago.”

Hengler hopes in the future that the MAIS would allow Regents to compete at higher divisions especially given how young the team is and the likelihood of keeping the core of the team over the next couple seasons.

“Definitely where we are headed as a program and how young we are, I hope we get to compete even at a higher level, divisions, or an overall state championship future,” Hengler said. “For where we are for the size of a school we are, the score showed it today.”

After battling the first 21 points and holding a slim 11-10 first set lead, Regents outscored West Memphis 64-24 the rest of the way, led by the 13 kill and seven dig performance of senior Jamya Fondren, who also got the championship-clinching kill to finish the match. Fondren finished with 17 kills in the two matches.

“It was a great day for Jamya,” Hengler said of her senior middle blocker. “I was excited to put her on display in a sense. I think the team was really excited for her. We sent her off on a strong note.”