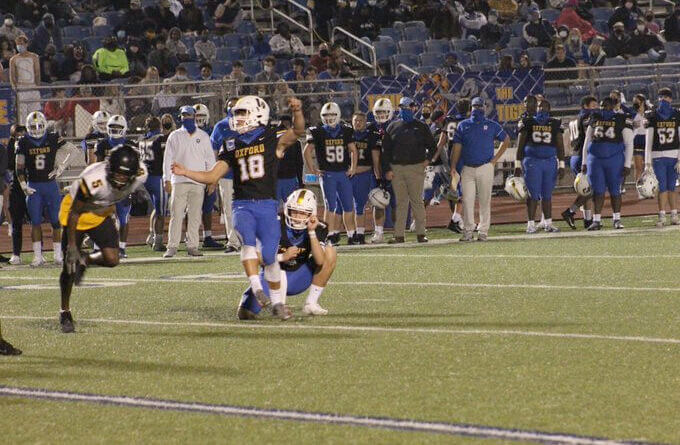 In the second go-around with the Hernando Tigers, the Oxford Chargers had the lead wire-to-wire in this meeting.

There was no need to recover from another double-digit deficit like they did in the first meeting. This time Oxford was better prepared in the Second Round of the MHSAA Class 6A playoffs in their 41-26 win over Hernando Friday night in a final score that was not as close as the game indicated as Oxford was ahead 41-12 with two minutes left in the contest. The win gave Oxford coach Chris Cutcliffe his 50th career head coaching win and the Charger’s 24th win in a row.

“That’s our staff’s 50th win,” Cutcliffe said about the milestone win. “I think our coaching staff is fantastic. Those guys did a great job and did a great job getting our guys ready to play tonight. None of those 50 would’ve happened without them.”

Oxford (11-0 overall) took 14 plays and covered 73 yards, capped with a Michael Harvey quarterback sneak from inside the one-yard-line on fourth-and-goal. The two-point conversion attempt was good and Oxford led 8-0 with 4:13 left in the first quarter.

It wasn’t until the second quarter when Hernando (7-5) was able to put a drive together and finished that drive with a 26-yard pass from Zach Wilcke to Reid Flanagan. Like in the first meeting, their extra point was blocked, so Oxford kept an 8-6 lead with 10:02 left in the second quarter.

“They’re a really good football team,” Cutcliffe said of Hernando. “They have a lot of playmakers. Reid Flanagan, you saw him make a bunch of plays throughout the night. Zach Wilcke is a really talented player, so it was a big challenge for us. We did a good job of keeping them out of the end zone a couple drives and stepping up in the red zone. Offensively we did a good job moving the ball all night.”

After a failed onside kick attempt by Hernando, Oxford used a big play, but stalled in the red zone and Jack Tannehill kick a 36-yard field goal to extend Oxford’s lead to 11-6 with 9:00 left until halftime. The Chargers than was able to drive it to Hernando’s 28. The Tigers had an option to take a holding penalty called against Oxford on the third down play before to put the ball outside Tannehill’s field goal range, but Hernando declined the penalty before the field goal attempt and Tannehill made them pay for it by knocking in a season-best 45-yard attempt and extended Oxford’s lead to 14-6 with 4:43 left until halftime.

Hernando responded with a drive nearly eating up all of the second quarter clock, capped with a 7-yard Brody Martin run. Hernando’s two-point conversion to tie the game failed and it kept Oxford the lead at 14-12 with 25 seconds left.

Like in the first meeting, that was just too much time for Harvey and the Oxford offense. Harvey led the offense down to the Hernando 4, but had to settle for a Tannehill 21-yard field goal at the halftime horn to give Oxford a 17-12 lead at the break.

The Chargers received the second half kickoff and used a nine-play, 73-yard drive capped when Harvey found Trynten Brannon from 14 yards out to extend the lead to 24-12 with 8:41 left in the third quarter. On the ensuing drive, Omar Howell capped a four-play drive bullying Tiger defenders 23 yards for a score and further extended the lead to 31-12 with 5:49 left in the quarter one play after Harvey found a wide open Jay Wortham for 37 yards.

“I thought Omar played incredibly well,” Cutcliffe said of his tailback. “He was really physical and did a great job. I thought we did a great job up front. I thought our tight ends were great in the run blocking game as well.”

After a turnover on downs, the Chargers got to Hernando’s 20 before stalling out. Tannehill again was able to provide three points with a 37-yard field goal and extend the lead to 34-12 as the third quarter clock was expiring.

“Jack’s consistency, his work ethic, what he does on the practice field week after week is just been fun to watch,” Cutcliffe said of Tannehill’s four made field goals during the contest. “It’s impressive and his dedication, he deserves everything he gets out on this field because he earns it.”

Oxford finished the scoring with a Cam McJunkins 4-yard run late in the fourth quarter to give Oxford an insurmountable 41-12 lead. Hernando scored a couple touchdowns sandwiched between a successful onside kick attempt, but failed on their second onside kick attempt to seal the contest.

Oxford advances to the North Half round of the playoffs and will travel to Clinton for a chance to defend their 6A championship. Kickoff next Friday is set for 7:00 p.m.