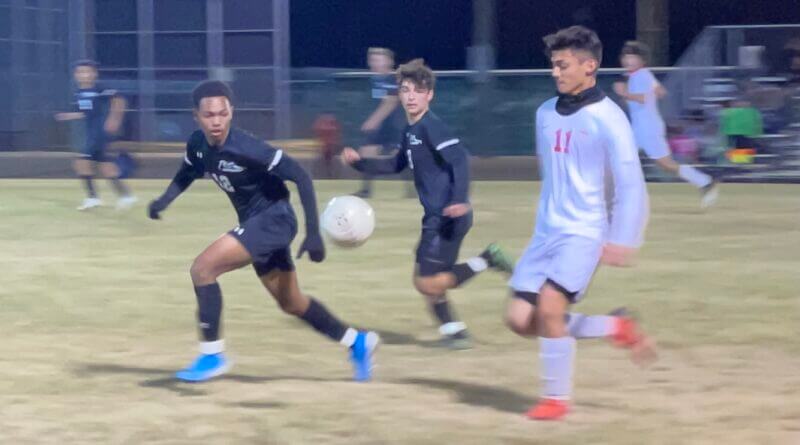 LAKE CORMORANT – The Lafayette Lady Commodores made easy work of the Lake Cormorant Lady Gators with a 7-0 mercy-ruled win while the Lafayette boys dropped a heartbreaker to the Gators 6-5 in penalty kicks after going to a 1-1 draw in regulation and through extra time. For tiebreaker purposes, it’ll officially go down as a 2-1 Lake Cormorant win.

It didn’t start easy for Lafayette (7-0 overall, 1-0 in Division 1-5A) as the Lady Commodores only mustered two goals in the first 35 minutes against Lake Cormorant (0-4, 0-1), but did manage to score the next five over the last 27 minutes when the game was over by the 7-goal mercy-rule lead. Lafayette outshot Lake Cormorant 36-1, including putting 17 shots on goal.

“(Lake Cormorant has) improved a ton,” Lafayette girls coach Melinda Scruggs said about the Lady Gators and their ability to hold the Lady Commodores offense in check for the majority of the first half. “Obviously their coaches have done a fantastic job having those girls improve from the past, so kudos to them, but I think we did some good things being able to possess the ball decently. I know we had tons of balls wide, getting those balls in the box from crosses, lots of corner kicks. Definitely lots of opportunities in front of the net and that’s what we want.”

Lafayette did score early in the match in the 5th minute with a Hudson Lindsay goal and would score again in the 24th minute to make the lead 2-0. Julia Perkins and Lillie Grace McCutchen put together quick goals in the 35th and 39th minute respectively to end the first half and take a 4-0 lead at the break. Katelin Johnson put in a goal in the 44th minute, Caroline Perkins in the 50th minute, and finally Julia Perkin’s second goal of the night in the 62nd minute ended the match in a mercy rule. Lindsay added three assists to the other five goals, matching the three assists from Lucy Wilson. Johnson and Caroline Wilson also had an assist for the Lady Commodores.

Lafayette (3-3-1, 0-1) was unable to hold on to its early 1-0 lead in their defeat to Lake Cormorant (1-4, 1-0), starting off division play on the wrong foot with strong teams with two games each from Center Hill and Saltillo still left along with a home match against the Gators later on. The Commodores got on the board first in the 15th minute by Carson Taylor on a ball that slipped through to the back post and the Gator keeper out of position.

Lake Cormorant was able to respond in the second half after Lafayette committed back-to-back fouls with the latter being committed in the Commodore penalty area. The Gators were able to put away the ensuing penalty kick in the 54th minute to tie the match at 1-1, a score that would remain the same throughout the remainder of regulation and through the two 10-minute extra time periods, putting the match into a best-of-five penalty kicks.

” (Twenty-one shots) is a lot,” Lafayette boys coach Gene Anderson said. “Just couldn’t get one to fall. The best teams doesn’t always win sometimes. The foul we gave up in the (penalty) box was the game right there.”

Lafayette outshot Lake Cormorant 21-7 in the match and had more corner kicks 8-3. Lake Cormorant was called for 16 fouls against Lafayette’s 5. Nathaniel Dees, Anthony Jones, Osvaldo Arellano, Lisandro Escodebo, and Hollis Gaines each scored a shootout goal for the Commodores.