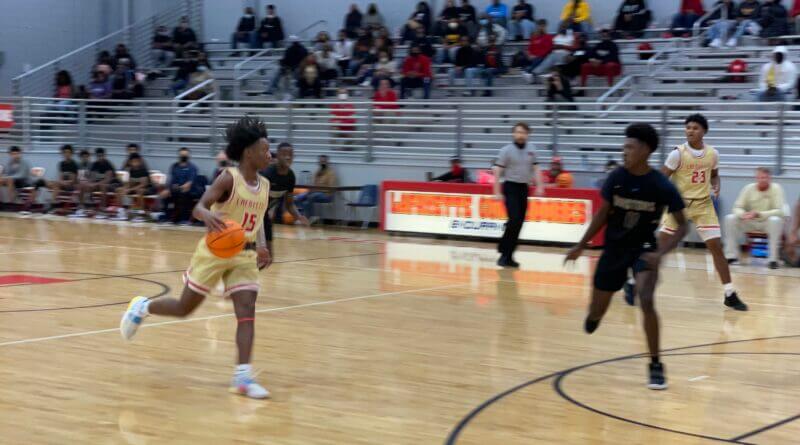 The Lafayette Lady Commodore’s game plan was to make someone else for the Oxford Lady Chargers other than Audria Houston beat them.

Consider that mission accomplished in the last three quarters.

Houston was held to 13 points, and just four points in the last three quarters after scoring all nine of Oxford’s first quarter points, but her teammates combined to shoot 11-for-48 and a 0-for-5 mark from the free throw line in Lafayette’s 47-38 victory over Oxford Friday night in the LHS Gym.

“We were able to get back to basics defensively,” Lafayette girls coach Shayne Linzy said regarding taking losses in back-to-back days against Tishomingo County and South Panola on Monday and Tuesday respectively. “We’ve really gone back and teach these kids how we want our defense to work. At times I thought our defense was great.”

Two of Oxford’s main contributors in Keyunna Tellis and Miracle Joiner combined to score nine points on 4-for-28 shooting. One thing Oxford (5-7 overall) was able to do well was in the rebounding department. The Lady Chargers out rebounded the Lady ‘Dores 23-13 in the first half, but Lafayette (2-4) won the battle in the second half 21-15. Oxford led Lafayette 21-18 at halftime.

“The other part we are trying to work on is rebounding and blocking out,” Linzy said. “At times we were great, and at other times we weren’t so great. We’re young and we’re going to keep getting better at it. We’ve played one of the top 4A schools in the state, four or five 6A schools that are all playoff potential teams. Let’s get better.”

Oxford girls will return to the OHS Gym to face Tupelo Tuesday. JV girls begins at 5:00 p.m. while Varsity girls will begin at 6:00 p.m. Lafayette will wait until next Friday night to face Horn Lake. Varsity will tip at 6:00 p.m. back in the LHS Gym.

Oxford boys basketball had to back-out of the night-cap due to quarantining from COVID-19 cases on the team, so Olive Branch agreed to play Lafayette in the night cap. The Conquistadors ran away from Lafayette in the end winning the game 72-61.

“Their size gave us trouble and their length kinda gave us trouble, but we were back and forth with them right there,” Lafayette boys coach Brad Gray said. “They made the run in the second quarter. Ten (Jaylyn Tylee) got loose a couple times and hit a few 3’s. They got the ball inside to their big guys a couple times, a couple offensive rebounds and some putbacks and and-ones. With a team like Olive Branch as talented as they are and as hard as they play, you can’t dig yourself a hole or you’ll have to fight three times as hard just to get back even.

Olive Branch took a 40-28 lead into halftime and maintained the lead through the first half of the third quarter at 47-33 before Kylen Vaughn caught fire from 3-point land hitting three such shots in their 11-3 run over a two minute span to cut the lead down to six at 50-44 nearing the end of the third quarter. The run was short-lived however as Olive Branch settled back down and made an 11-3 run of their own going into the fourth quarter push the lead back out to 14 at 61-47.

“We did (hit a lull after the run),” Gray said. “That’s kinda been the story for us over the last couple of seasons. In spurts, we can score a lot of points, and then we will have those dry spells for four or five possessions where we can’t get any points out of our possessions and that’s one thing that we have to do better as a team. We have to score a little more consistently. Gotta be able to get stops a little more consistently.

The Commodores will travel to Booneville on Monday before rejoining the ladies at home against Horn Lake. Tipoff at Booneville is at 6:00 p.m. while tip for the Horn Lake game will be at 7:30 p.m.