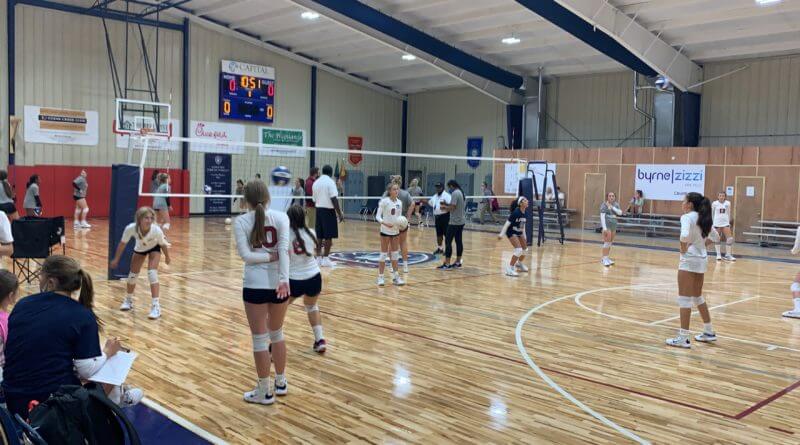 The gym floor at Regents School of Oxford was renovated this past spring and Regents coach Kacie Hengler saw improved play after dropping their first meeting at Hartfield Academy, but the Lady Hawks still bested the Lady Lions in their home opener 3-0 (25-13, 25-11, 25-19) Thursday night inside the Regents Gym.

“They were so excited,” Hengler said. “It’s so nice to be home. It was a perfect time to be home. The loss doesn’t show that, but the way that they’ve played and they’re really starting to come together and figure out what they are doing. Hartfield just beat JA (Jackson Academy) last week so in my book this team is probably the best team in the entire state in (both MAIS) and (MHSAA), anything.”

Hartfield Academy (6-0 overall) is considered one of the best teams in the state because of Ole Miss signee outside hitter Julia Dyess. Dyess ended the match with just three kills and three digs as the Lady Hawks head coach Morgan McNeely elected to rest her during the later stages of the contest after playing against Jackson Academy earlier this week where she was vital in the Lady Hawk’s win.

“They’re definitely one of the top them and JA,” Hengler continued. “To go 25-19 in the third set, I’m so proud of my girls. You would never know they were losing with the energy and the looks on their faces. As a coach, you really can’t ask for more than that especially given their ages.”

Regents’ (2-5) roster has just four players that are sophomores or older. The remainder of the team are eighth graders and there is one sixth grader on the squad. A player that helped keep Regents in the match was junior middle blocker Jamya Fondren. Fondren finished with four kills and two digs, but had four blocks that gave the Lady Lions a much needed momentum boost during the third set.

“It’s huge,” Hengler said about Fondren’s blocking. “It definitely rattled them and got into their heads. We did miss a few important serves tonight that we normally would get. We are a little more consistent than that. It was definitely a momentum swing.”

Regents stayed within two to three points throughout most of the third set in order to try and force a fourth set, but service errors during the later stages squashed any momentum that may have been built up by the big defensive plays from Fondren and allowed the Lady Hawks to ice the game away.

As the MHSAA looks to begin their delayed season on Monday, a number of public schools will begin to enter the upcoming Regents volleyball schedule. Regents will be hosting 6A foe Starkville on Monday and then they will play Water Valley, New Hope, and Tupelo the following week. There are very few MAIS schools in north Mississippi that play Volleyball, so several area and much closer northern public schools are on the schedule. Many of the MAIS schools that play volleyball reside around the Jackson-area.

“I think we are as ready as we could be at this point,” Hengler said about the team’s outlook. “They’re definitely where I want them to be at this point. I’m happy with their progress. They are just getting comfortable with where they should be on the court and now they’ll get even more aggressive. Defensively we need to clean it up a little bit in where we need to be on the court, but playing tough teams like this keeps them disciplined because when you play teams that aren’t consistent, you can cheat on the court and this game doesn’t let them do that.”