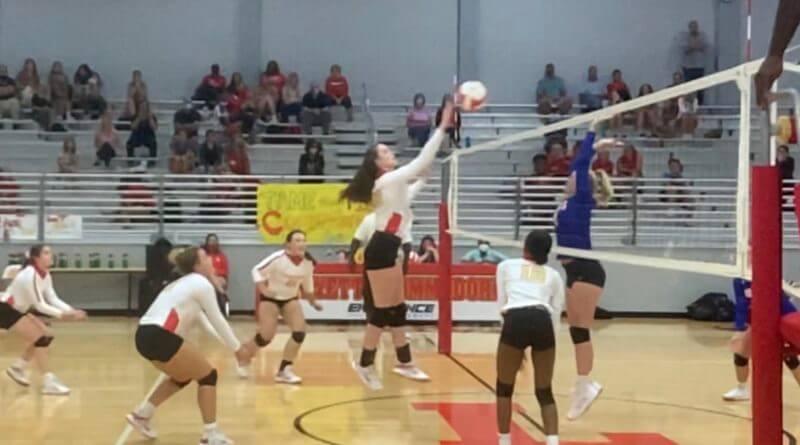 The Lafayette Lady Commodores got a little mentally tougher Thursday night in the LHS Gym.

It took some of that mental toughness for Lafayette to defeat the Saltillo Lady Tigers 3-1 (25-17, 25-17, 24-26, 25-22) and earn their first Division 1-5A win of the season after easily taking the first two sets. It is something that has stemmed after the loss to Lake Cormorant last Thursday and a couple other matches earlier this season where Lafayette played well for the first two sets, but then hit the mental lull in the following set.

“We can’t do really good things and then something goes wrong because volleyball is a game of errors,” Lafayette head coach Kelsie Poole said. “We can’t get down on that one point. We have to have mental toughness and go to the next point.”

From the start, it was a back-and-forth first set until Lafayette (6-3 overall, 1-1 in Division 1-5A) started to pull away after the two teams traded leads until it was an 8-8 tie. The Lady ‘Dores reeled off four straight to take a 12-8 advantage, and then started to take advantage of Saltillo’s mistakes and cruise to a 25-17 first set win.

In the second set, Lafayette continued to capitalize on Saltillo (7-4, 0-2) miscues as the Lady Tigers became disoriented, only slapping down two kills as a team in the set. A key player for the Lady ‘Dores that is starting to put the ball down on the opponent’s court more is outside-hitter Brennice Kennedy who ended the night with a season-high 14 kills to go along with eight digs defensively. Poole has been looking for more consistency with their outside hitting all season and believes she has found a more consistent weapon with Kennedy instead of primarily trying to play through her two middle blockers. Lafayette would take set two 25-17.

“We have been working on power reaching, transitioning to the correct place,” Poole said of Kennedy. “She answered that to everything that we’ve been challenging her to do in practice. I thought she did a phenomenal job.”

In set three, Saltillo started getting their offense together, jumping out to a 10-6 lead that ballooned to five at 14-9 where the Lady Tigers were a much more aggressive team than how they played the second set. Poole agreed that her team got complacent after the easily winning the first two sets and that Lafayette wasn’t mentally ready for Saltillo’s attack in the third set.

“After every single game, we say ‘hey, enjoy that, but it is done. We still have another game to play. Don’t lay down,'” Poole said on what she told her team between each set. “That’s what I told them several times today. Do not lay down for a team just because you think it is over. They want to win just like we want to win. They’re not going to quit playing. They’re pretty scrappy. They’re a good Saltillo team.”

Lafayette was able to recover from the 14-9 deficit, take the lead, and induced a match point attempt at 24-23, but Saltillo not only saved match point, but took the next three points to stay alive and force set four 26-24.

“I don’t think it was a lack of focus,” Poole said about the third set. “I just think it was panic. Not focus, it was panic. It was mental toughness. We’re working on some things so I wasn’t upset about the X’s and O’s, it was strictly because if we made a mistake, we weren’t coming back. it was taking too long to recover from it.”

Lafayette opened the fourth set with a 10-5 advantage and were able to hold on to that advantage through the middle of the set until it was 21-17 when Saltillo scored three in a row to bring it to 21-20, but ultimately couldn’t get over the top as the Lady ‘Dores were able to make the plays late and take the set and the match 25-22.

Aside from Kennedy’s big night, Lafayette was led by the match-high 15 kills from Kailey Gooch who added seven digs and five blocks defensively. Maggie Tower chipped in seven kills and three blocks while on the court. Caitlyn Rhea had a match-high 21 digs defensively. Deundria Shaw and Caroline Crockett each had nine digs for Lafayette. The Lady ‘Dores as a team had 71 digs.

Saltillo was led with team-highs of nine kills and 15 digs of Brianna Huckaby. Shelby Payne matched Huckaby defensively with 15 digs of her own. Caitlyn Carnathan was on their bumper behind them with 14 digs as well. Ainsley Robison tallied a match-high five service aces to led the Lady Tiger servers.

Lafayette will return to action next week traveling to Water Valley Monday night. The Lady ‘Dores next division match will be on the road at Center Hill Tuesday night. For both matches, JV begins at 5 p.m. while Varsity will start at 6 p.m.