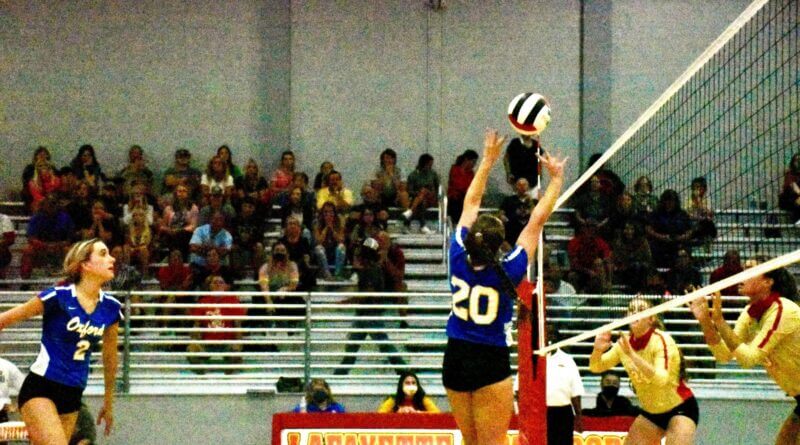 It was loud from the opening serve as the first set went back and forth for the first half of the first set as neither team could keep a service in play until Ainsley Tacke got going. She had five of her nine kills in the first set.

“There’s a few things we are struggling with, so I wouldn’t say we’re perfect,” Oxford coach Ashley Martin said with regards to Oxford’s service errors on the night. “But we work really hard on perfecting little things.”

Oxford used the service runs of Ava East and scored three of her four service aces in the first set to get away from Lafayette (10-4 overall) and take the lead in the game. In the second set, it was an eight-point service run from Tacke that pushed the lead out to nine at 13-4 and cruised to a second set victory. The Lady ‘Dores in the second set never stayed on serve for more than one point.

In the third set, Lafayette jumped out to a 4-0 lead on their longest service run of the night, but Martin refused to call a timeout and let her girls on the court figure out how to get out of the hole.

“Tonight in the third set, they were up on us, and at one point I thought of calling timeout,” Martin said. “But I was like, I’m not calling timeout, because they have to figure how to get themselves out of this. They fought really hard and did the things we talk about in practice to (get to the) finish.”

Oxford clawed their way to trail just 14-13 in the third set before using an 11-point service run from Bree Lyons to ice the match. Four players had at least six kills in the match for Oxford, including six kills from Lyons.

“We have a whole front line,” Lyons said. “You can’t really depend on one person. You have the whole team you can go to.”

East added seven kills to her four aces. Torrey Tkach had five kills and two blocks to lead a balanced offense for the Lady Chargers.

Oxford had 38 kills as a team and 15 service aces, while Lafayette only had 22 and two respectively.

Oxford returns home to face Tupelo while Lafayette will kickoff their divisional slate at Saltillo on Thursday. JV starts at 5:00 p.m. while Varsity will start at 6:00 p.m.