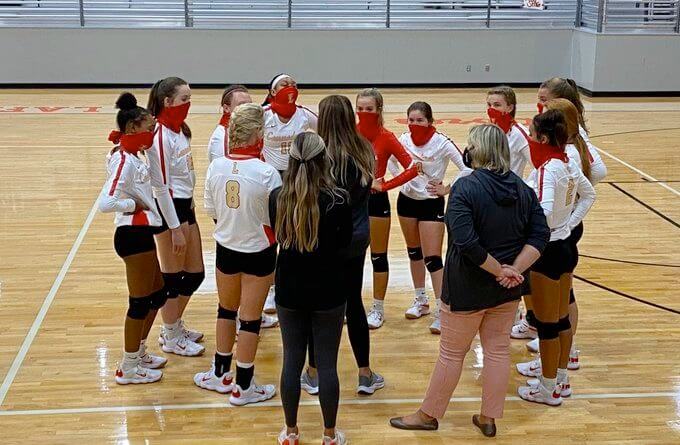 “They were pretty scrappy,” Poole said. “We shouldn’t take any team lightly in general. I told the kids that any team that steps up to face us, they’re going to be here to play. They aren’t just going to lay down and give it to us.”

It was made apparent that those words got through as the Olive Branch Lady Conquistadors took the second set from Lafayette, but the Lady ‘Dores were able to adjust in their 3-1 (25-20, 21-25, 25-23, 25-16) victory Wednesday afternoon.

Lafayette (4-2 overall) wasn’t off to their best start to the match as they fell behind as many as four points at three separate points in the first set, the latest being at a 17-13 Lady ‘Quistor lead, but then the Lady ‘Dores went on a 12-3 run to close the set 25-20 and take the 1-0 advantage heading into set two.

In the second set, a role reversal was played as Lafayette had maintained a small lead for the first two-thirds of the set and led 17-15, but it was Olive Branch (1-5) who made some plays down the stretch and went on a 10-4 run to even the match at 1-1. It was a very defensive match where the number of digs more than doubled the number of kills both teams had in the match, and ultimately errors from both teams instead of kills ended what otherwise was impressively long rallies throughout the first three sets.

“If we aren’t going to play, we’re going to let mental errors defeat us, we might as well go home,” Poole said. “We’ve got to find a way to dig that out, come back and play our game and stay disciplined, and I think they did a good job of that.”

Discipline was key for Lafayette in the third and fourth sets as they started to adjust to the style of play Olive Branch was scoring on, which were a lot of tip-pass kills. Poole noted some tendencies the Lady ‘Quistors were showing during the first two sets. The Lady ‘Dores fell behind by five points in the third set at two different times at 12-7 and again at 16-11, but crawled back into the set being better defensively adjusting to the play of Olive Branch and pulled out ahead 25-23 in the third set to take a 2-1 lead.

In the fourth set, Lafayette quickly built a 9-1 lead, the largest lead either team had in the match, and a lead Olive Branch was unable to recover from. The Lady ‘Quistors brought it down to a five-point margin a few times during the set, but the Lady ‘Dores maintained the lead throughout the set to run away with the set 25-16 and take the match.

In a defensively charged game, Lafayette libero Chloe Carr led all players defensively with a match-high 23 digs. Grace Foster also had a huge night defensively with 18 digs. Deundra Shaw and Caroline Crockett also posted double-digit digs with 11 each. Kailey Gooch led Lafayette offensively with match-highs of 12 kills and eight blocks. Maggie Tower complimented her on offense with eight kills and four blocks of her own.

Lafayette will travel to their first Division 1-5A match of the season at Lake Cormorant Thursday night. JV starts at 5 p.m. and Varsity will start at 6 p.m.